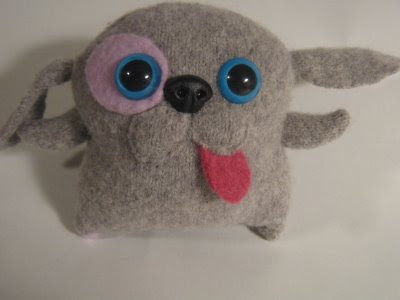 lil grey dog. one foot is lilac like her eye patch.

i have spent a few nights on the couch sewing. my days are spent over at the new I Like You space helping them spruce it up, put up shelves, mosaicing the bathroom floor, things of that nature. 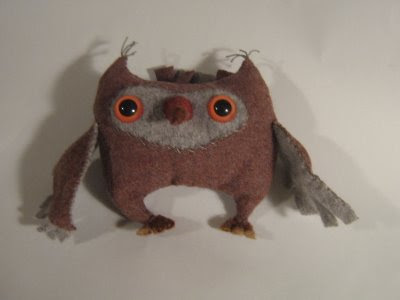 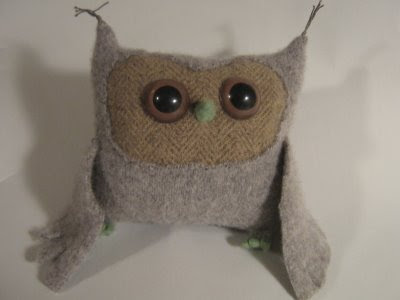 not feeling like taking the time to set up beautiful, artful, well lit shots of my new animals. so here are some crap-dash photos for you to enjoy. *real* photos coming soon. i promise.

stitchy little owls. grey wool felt with strange brownish woven fabric i got from a friend, and brownish tweed that i think was a jacket at some point. they both feature reverse applique. i sewed the heart-shaped patch on to the reverse of the fabric, then cut out the face and reinforced it with decorative stitching. me likey.
Posted by becca jo at 9:52 PM 3 comments:

TWICE this past week Duckie Uglings were featured on the television! On two different stations!!!
http://www.wcco.com/video/?id=56099@wcco.dayport.com
Look for my stuff at 2:49 and 2:50, then a few more shots around the store
http://www.showcaseminnesota.com/show/client_article.aspx?storyid=540296
No timestamp on this one, and the sound cuts out halfway through, so I've asked for a transcript so I can find out what they are saying!

Thanks to my folks and Jason who spotted these blurbs!
Posted by becca jo at 7:52 AM 3 comments: 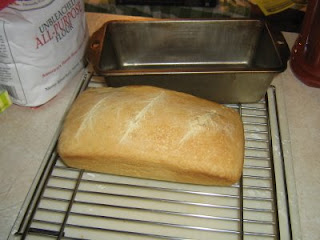 I made two loaves of bread from the wild yeast starter that I made last week. Typical, I was impatient and didn't knead it enough or let it rise high enough. It tasted delish but was a little...well...thick.

The second loaf was a little higher, because it was a larger portion to begin with. But I learned some valuable lessons off my first attempt.

The second attempt is bubbling away on the countertop as I type, I've fed it a little new flour, some filtered water, and some honey. I'm going to amp up the garlic factor in this one with some real actual garlic instead of just garlic salt, so I hope that helps cut the sourness.

In other exciting food news, I got a stovetop espresso maker at Barnes and Noble for like 75% off. They were practically paying me to take it! I made a pot of it the other day up in Hugo, the instructions said to throw out the first batch but my dad was like let's try it, and....OOOF. Tasted like a factory floor. The second batch was much better!

And the second round of Inappropriate Laughter was last nite, it went...well..unevenly! They laughed at new spots and didn't laugh at old spots. Comedy is hard, man!

I have been laid up with a cold all week, it finally broke yesterday morning but it caused a lot of sleepless nights. Ugh. I still don't understand why we have to get colds! We've put a man on the moon, can't we solve the common cold!?!?!?

I'm felting up some sweaters I got at the GW today, they are going into a dog and an owl for some high school FB friends' kids! Whoo hoo!
Posted by becca jo at 8:00 PM 1 comment:

Valentines and other indoor activities 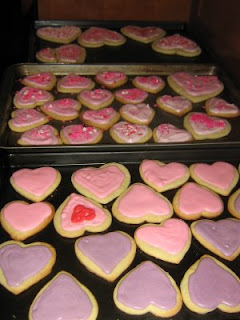 Inappropriate Laughter opened Thursday nite. It went relatively well, if you don't count the fact that the CD I burned for the music and sound cues didn't work and I had to run back to the highland house to pick up my laptop. The round trip from the BLB and back took about an hour. So instead of running lines or relaxing I was stuck in traffic.
But earlier in the day, we had gotten the extremely good news that my dad's friend's cancer surgery was a success, no spread of the cancer and they are sure they got it all. So I just kept the attitude that 'you know what, this is not a huge disaster, there are much bigger fish to fry' and it kept me calm and sane as I waited for each light on Lake Street to turn green.....

Later that night, Chip and Julie and the boys arrived at Hugo just as I did. I was awoken Friday AM by my cherubic little nephew Matthew, we proceeded to play with his little brother Michael, make cookies, get ready for Betsy and David to arrive, and prepare for my gram's 90th Birthday Party on Saturday! David wrote her a song, which made all the women present cry! And my Uncle Jim came in from CA to celebrate too. We had a great dinner and about 4 different kinds of deserts. My gram was really honored to have us all there, and I know it was a big effort for all the out of town folks to come. What a great way to spend Valentines, although I am sick of spending it as a single. ha!

More playing with the boys yesterday (when you ask Matthew a question he doesn't know the answer to, he says either "me no know" or "i got it for my birthday" which is adorable), 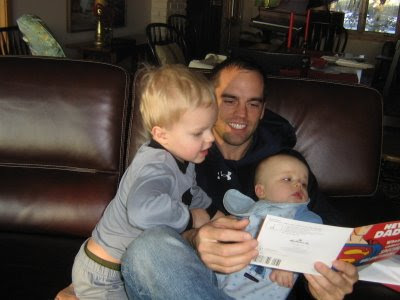 then they left around 12. I took a nice long nap, then hung out with Betsy and David in the afternoon and ate way too many delish cookies.
Took a nice long walk with Betsy and David this AM out in the wetlands behind the house, loafed around by myself after they left, and now have returned to the House Sitting House to find my sourdough starter boiling like a 4th Grade Science Fair volcano! I've mixed up a loaf (I hope!) and it's sitting out to rise for the first time. Tomorrow at this time, I will hopefully be baking my first two sourdough loafs! I will report on their taste if they are edible. 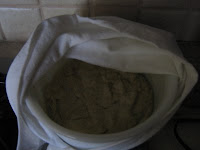 Life on the Rollercoaster...

I had a great weekend. Run, don't walk, to your closest 3-D theater to see CORALINE.
Or just spend hours on the amazing website. Oh how I wish I had been born a stop-motion animator.....
So my car wouldn't start yesterday AM. Turns out the distributor cap and spark plugs and wires went bad. Boo. So Jyk picked me up, we went walking @ HarMar, then I came back to deal with the car mess. Did some prep work with Jason for Inappropriate Laughter (our sketch comedy show which opens Thursday at the BLB, stop by if you like sketch comedy!) with music and sound effects, etc.
Today, Jyk picked me up again and we went to the Como Conservatory to walk, which was more like an amble. I am going to be doing wedding flowers for a friend who is getting married at the Conservatory this fall, so it was also kind of a scouting mission! We walked around in the humid air, visited the monkeys and big cats, the lovely Koi, and learn about bonsai. Jyk of course wanted to get a new bonsai so we went to Linder's where he got some seeds. In about 4 years he'll have a super awesome bonsai grown from scratch. We'll see.
After Jyk dropped me off at the repair shop, I took myself to the bookstore. I perused several garden and craft magazines, and 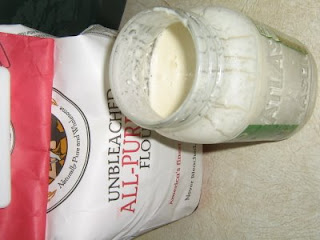 read this amazing book cover-to cover (ok I skimmed the music chapter, I have to admit) and now I have a new blog addiction too ;) . It is well worth checking out from your local library, this girl shares her triumphs and failures as she attempts to take responsibility for her place in the food chain.
My dad is talking about us getting chickens this year on the farm, and although I won't be there while they're tiny tiny tiny chicks, I am SO excited at this prospect. His mom always had chickens and it made trips to my gramma M's so much fun.....she made a lot of food for herself, from canning to baking....
Along that front, here's my sourdough starter sitting on the countertop @ the house sitting house. I've never tried this before but I've read about doing it in several magazines lately and I've decided to give it a go. I may just end up with wallpaper paste though, we'll see. Sorry for the sidewise photo, there's not much to see anyway. Just a jar full of flour and water. Stay tuned for the magic of fermentation!
Posted by becca jo at 8:09 PM 1 comment: 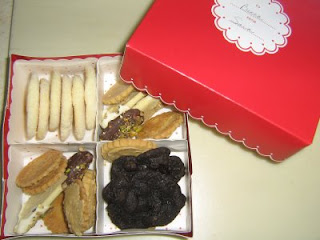 Well sorry I haven't been blogging this past week, I will give you a quick recap of all the awesomeness, and sorry if I leave some things out.

*Got the heater blower motor fixed in the car, left Hugo on Wednesday AM to come back down to the house-sitting-house.

*Got hooked on Lexulous and Twirl on facebook, but realize I freeze when the answers aren't immediately apparent! I need to work on that...

*Had lovely breakfast with Sara, Nick, and Brynn, and also got those COOKIES! I won't show you how many are left, 24 hours after getting them, because they are all in my tummy. even the box is adorable.

*Rehearsed for the upcoming sketch show, twice, and wrote a few more sketches. I hope they make it into the show but I won't be crushed if they don't. More details when we get cl 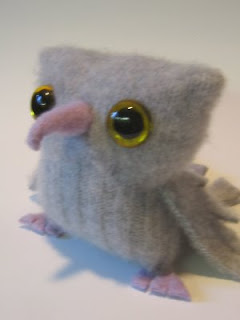 oser to the date, I promise

*Had coffee with my friend Heather the teacher, she is trying to get me set up as a visiting artist in her school to do a few murals! Yay!

*Went out for an amazingly delicious dinner at Bellanotte in Mpls. Jason had gift certificates so I paid like $20 for a 4 course meal plus drink. so. freaking. good. OOOH!

*Have been to the bookstore down the street so many times they must think I live there. LOVE IT!

*Made a smattering of animals, though I forgot all my thread and needles up in Hugo so I had to buy some *new* stuff at artscraps. listing half on etsy, and taking half to benevolent acorn tomorrow.

*watched the super bowl by myself, and the puppy bowl, and the office, afterwards. i wished there was someone i could make snarky comments to, but alas, i just made them to myself.
Posted by becca jo at 9:41 AM No comments: