eep! the blower motor in my car's heating system finally died! the past few days i had to drive over a bump to get the thing to start working, but this AM it just wouldn't go on no matter how many potholes i purposely hit. thanks st. paul for not fixing your roads!

so $250 is gonna be the damage, OOSH. i am stranded in hugo, i'm going to go out and actually do some studio work! yay! i picked up a bunch of cute organizey things from michael's with my gift cert from chip and julie, so i'm gonna put them to work! i also got new gel pens and stuff to make a black-n-white page sketchbook, but i left it out in highland where i'm house sitting.

maybe i will post some new animals if i can get them done tonite! the owls have been VERY popular, and i have had some valentine's requests as well.
Posted by becca jo at 7:17 PM No comments: i seem to have mostly gotten over the funk.
i am still going to brekkie with the folks, but then i forgot about a reunion committee planning meeting i'm going to! whoops!
still no crafting time in the near future, but i did go see Underworld:Rise of the Lycans (meh) and have been doing a lot of reading lately-i went to b&n twice yesterday and then to the half-price bookstore right up the street from that. i bought two magazines and three books (one for my sister), of which i read all of them yesterday.

Water for Elephants was good...but i wouldn't say i LOVED it. i DID love Middlesex, the last book i read, and so maybe i'm ruined for other fiction now after that one. anyway. i thought it got a little skimpy during the love portion of the book, and some of the character's relationships seemed a ridiculous (even by 1930's standards) but i did really enjoy the day-to-day circus stuff, and the photos that began the circus chapters. who doesn't love the idea of running off to join the circus? the flash back/forward structure was also very effective, several times i squeezed out a tear or two as i thought of my own grandmother who is the same age as the protaganist of the book.

anyway. i literally couldn't put it down, and started the book at 5 PM, took a dinner and chat break, and then finished it by 1 AM. that's my favorite way to read a book, is pretty much straight through.

it really reminded me of Carnivale, except they didn't have animals in that circus.

i have always had a strange guilt attraction and repulsion with the circus, even as a small kid. maybe it was the fear of clowns, or the awe of the animals who clearly were in distress....i dunno. i love the idea of a circus i guess, just not the reality of one.

but miss L (my high school english teacher) would be very upset with me as i completely missed the biblical references in the book. sheesh! she had us trained like russian bears to recognize those in every thing we read, right down to the back of a ketchup packet. i must be slipping in my old age.
Posted by becca jo at 8:13 AM 4 comments:

in the depth of winter, i'm feeling a little melancholy. since i'm not at my studio, i haven't 'made' anything (except for work and one birthday present) for almost a month! i am getting antsy!

sunday i will spend the AM in hugo celebrating my dad's birthday, and then we are going down to rochester to celebrate with aunts and uncles too. i know i have so much to be thankful for in this life (not the least of which is a new PRESIDENT!), i feel guilty for wanting more. but sometimes...i feel like those crows know what it's like to be searching for something you can never quite find........

send in the crows! 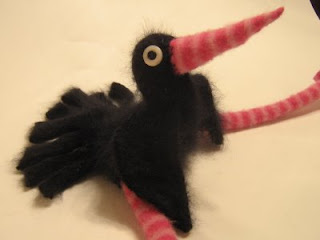 so lately, i have been seeing packs of crows hanging out in the trees. it's a bit unnerving to come upon this pack of black, SCREAMING, sinister looking birds but it's happened almost every day while i've been house sitting in highland park or working in minneapolis.and it's like, FREEZING cold out there, -20 air temp with wind! so i don't know if they are hanging out in packs to conserve energy or what. but they seem to gather right before sundown and perch in the trees. anyone else ever seen this kind of crow action? it's AWESOME and freaky at the same time.... 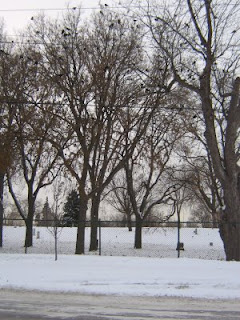 i grew up with crows all around my grandma's farm, but she 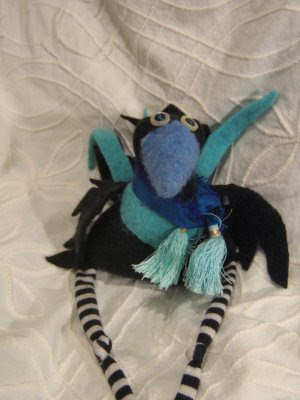 called them grackles. i have always wanted my very own pet crow, probably because of a roommate who was obsessed with brandon lee, and her subsequent watching of THE CROW like about a billion times....

here is what i encountered in downtown minneapolis. i actually stopped the car and took video, i'm sure the folks driving by and waiting for the bus thought i was a nutter. i really wish my camera had sound, these hundreds of birds were ALL calling to each other. they were roosting in 3-4 HUGE trees next to a church on one side of the street, and in about 10 trees ringing a park on the other side of the street.

anyway. i love that crows are always listed as the smartest of the birds, so smart in fact that they have actually shown tool making abilities! maybe aesop wasn't crazy after all!

duckie, of duckie uglings fame, is actually a crow. i have enjoyed creating crows more than any other animal in my storied history of stuffed animal making. i thi 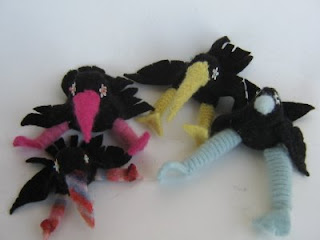 nk in honor of these guys, its time to make a few more!

PS betsy's arm surgery went very well! i didn't get to talk to her today, i'm sure she's pretty drugged up still. i will call her tomorrow to get the details, and see how she feels about now being a cyborg!
Posted by becca jo at 9:44 PM No comments: 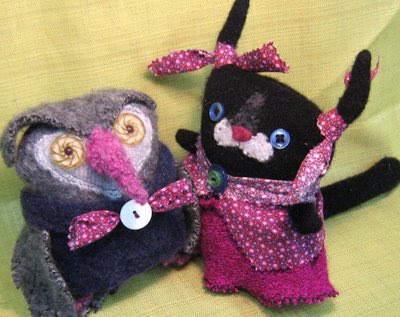 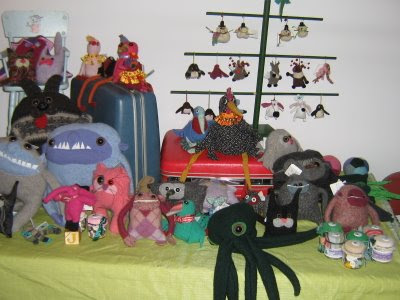 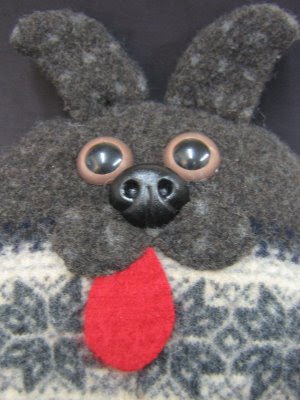 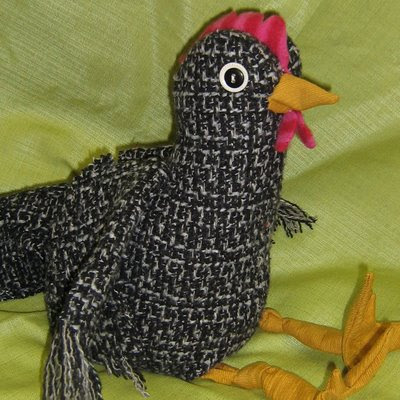 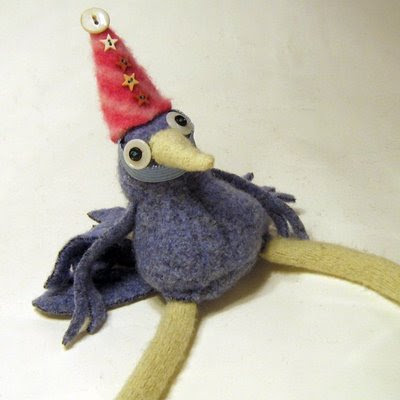 Hello Craftstravaganza Jury! Here are some images for you to peruse. Hope you like my stuff, SMOOCHES!

although i am completely exhausted from starting a new job and getting 'Miscast 2' open (which is fabulous by the way), i am totally loving being so busy again. well, ok, i wish i was eating dinner and getting more sleep. but other than that....

today i spoke to my nephew matthew on the phone, and when julie handed him the phone he said 'hi becca, i love my boat you gave me!' AWWWW i just about cried in the car! how cute!
anyway. that is all. i have to go to bed before my eyes fall out of their sockets.
Posted by becca jo at 12:35 AM No comments:

ur only a day away!

so much has gone on this past week, started the new job (which i LOVE!!!), started house sitting, and finished teching for MISCAST 2. i am so excited for it to open!

a few other projects are on the horizon, the sketch show in feb., a possible TV pilot this summer, a samuri movie (don't ask....), teaching some classes at Truly in WBL, and hopefully doing a few art shows this spring and summer! i wish there were 32 hours in the day so i could work 24 of them......
Posted by becca jo at 11:11 PM 1 comment:

started my new overhire job @ the G today, and got word it will last several weeks instead of just a few days. i get to shop on someone else's dime! how cool is that?

miscast 2 is humming along, the songs are bigger, the actors are so enthusiastic, and the staging and choreography are even better than last time (if i do say so myself!) but i'm freaking out over having to teach myself the light board and writing all the cues myself, not to mention gelling all the lights, focusing them, etc. AND getting the props, costumes, postcards, programs, and set done too. all while starting this new job.

and! i start house sitting tomorrow in highland park! am i packed, NO of course not! who needs sleep, right?
Posted by becca jo at 11:24 PM 1 comment:

who hasn't been there? right!?!? this cat needs to get his christmas cards in the mail!
Posted by becca jo at 6:56 PM 1 comment: