hahahahahah
love it
Posted by becca jo at 12:19 PM 5 comments:

Why you shouldn't spit out your gum

Hilarious little video, the whole series is super fun! apparently, they're for french iphone users? you can find more info here, but be wary of auto-play sound!

is she drinking a starbucks?

folks who are squeamish, republican, or vegetarians, please don't watch this video. 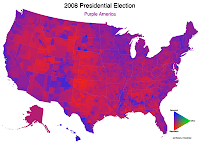 well Rudi and Judi (below) are off to Alaska, I think I have a fan up there! the same buyer got three owls last week, so that's a good feeling! people are responding to what i am doing with this different style of animal, both at sales and online. i gotta step it up though if i want to keep myself in the lifestyle to which i've become accustomed.

the Vanderbei maps are out, and here is the election result one, coded with 100% dem in blue, 100% repub in red, and counties coded by the intensity of that vote. Wow. What a beautiful country we live in. Purple mountains majesty indeed!

also intersting is the loss/gain map, which can be found on the same link. we've got a lot of work to maintain positive progress for these folks to want to continue to come to the light side of the force. hahaha
Posted by becca jo at 8:18 AM No comments:

Rudi and Judi, the Owl and the Pussycat 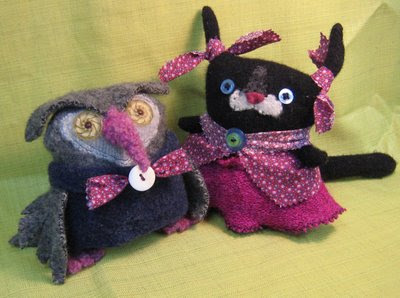 Rudi and Judi are now available on my etsy site!
Posted by becca jo at 11:48 AM 2 comments:

Morning on the Farm 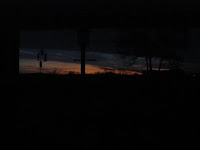 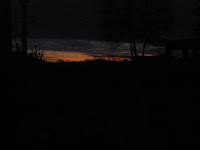 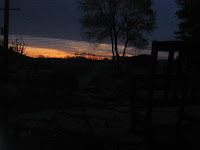 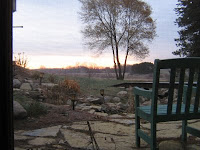 Woke up around 6:30 to an amazing sky. I tried to capture it over the last hour or so, to give you an idea of what I wake up to on mornings when I just can't sleep in.

My birthday noise machine knocked me out and I had a fantastic night of sleep. The 3000 calories I consumed at Shamrock's probably didn't hurt either.

Had a great night laughing with old friends, doing crossword puzzles while watching Monday Nite Football. My friend's mom's wake is today, and we just wanted to take him out for some good times and let him talk, or not, and I'm so glad we did.

I remember after we lost my aunt, uncle, and cousin in a plane crash, we went out to a pizza place after the funeral as a family and told stories and laughed for the first time after it happened. It was shocking to me at the time (a junior high kid) that we could laugh at a time of such loss and sadness, but now I know it's part of the healing journey that some people take. A way to return to semi-normalcy.

My friend Jason's blog was developed as a way to deal with the loss of his own mom, and even to read those stories now breaks my heart. But he's found a way to remember the stories of his journey without having to rely on his memory, and it's an amazing testament to her influence on his life.

I got my book submission done and sent off to be published (eep!), after getting my mom to sew it to test the pattern. I did one more variation on it which I call the Train Conductor hat, I'm gonna say I'll try to photograph it but if you read this blog, you know by now, I'm not that great at keeping photographing promises.

Last thing to report on, I've made myself a goal to wear earrings every day of year 33, because a. I have a ton of them, 2. I look good in earrings, and c. it'll give me a great reason to use up all the beads I still do have! It's gone well so far I haven't left the house without them yet.

Oh, and a little red squirrel has been popping up outside my window, in the rocks of the now-frozen pond and the veg outside my window. I hope he sticks around, he's a cheerful little jolt of fuzz as I sit at my computer!
Posted by becca jo at 7:14 AM No comments:

Friday was my birthday. It was a day of extreme sadness as one of my dear friend's mothers passed away early in the morning, and I got the news around 12.

I spent the day with my family; mother, father, and grandmother. Cake at her apartment and Madagascar 2 with my folks. I ran a quick trip to Minneapolis, then to my friend's house to spend some time watching TV and just hanging out.

I begin my 33rd year, my "Jesus" year, with a profound sense of how lucky I am to have an amazingly supportive and close family.

Life is a fragile thing and I am aware we are all on the bubble, all the time.
Posted by becca jo at 7:38 PM 2 comments:

sigh. it was like 80 degrees on monday. now they are predicting snow for tonight into tomorrow.

so much for global warming. gonna walk with the folks then tuck in for another day of sewing, and watch the flakes fly.

oh...and here's the purple primary map from Vanderbei. Will post the election map once it's complete. Gonna turn 33 in just a few days. My Jesus year is about to begin, which already includes being published in an upcoming book and trying to make a go of it as a full-time artiste. Eep!

Anyway, as for the birth-day itself, I have several plans including getting enough rest for ClapperClaw the next day! Good thing it doesn't start until late so I can sleep in! I dropped off the art for Sunday's opening at Art Start, and the good ladies went crazy over it. It's always fun to hear reactions to my work from fans!

I already got a pretty awesome early gift, a new president :) but what I'd really love from anyone reading the blog, is to donate time to your local favorite older person. Rake their leaves, bring them a home-baked treat, whatever. I will spend a big chunk of the day with my only remaining grandparent, as I try to do on a weekly basis, because she is not only a funny, amazing woman, but because I want to get as much time in with her as I can before she's gone.

The story about Frank Sinatra's daughter not going to the hospital to be with her dad so she could watch the ending of Seinfeld (which in my opinion wasn't that great anyway) has always stuck with me. It might be an urban legend, but every time I think to myself I'd rather do a instead of b, I wonder if I'd regret the decision to do 'a' if I knew that it'd be the last time I'd get the chance to do 'b'.

Anyway. Spend time with an older neighbor, relative, or friend this weekend and think of your good friend Becca, OK?!? Happy Birthday to me!
Posted by becca jo at 9:24 AM 1 comment:

I am happily overwhelmed.

I did feel sad when McCain's supporters were booing his calls for them to unite behind Barack Obama. He did an amazing job campaigning, making Obama work very hard to prove himself worthy of the job, and his exit from the campaign was graceful and classy. I only wish his supporters hadn't sullied his speech by their rudeness and....gosh I don't even know what to call it.

We really do live in a purple country, not red, not blue, and to get through the next 4 years we need to work towards a common goal, bring America back to the standing we used to enjoy economically, spiritually, and politically in the world.

I hope the folks that voted for McCain will take his words to heart, and embrace their new president, and do as McCain asked, work along side him to strengthen our country and move us forward into the 21st century. 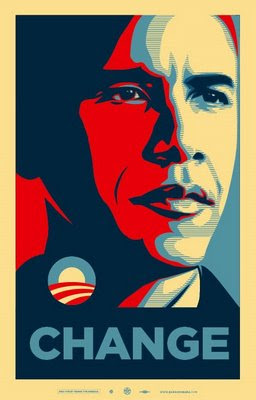 am off to watch returns and the daily show special with colleen and dave and their kids. i bought a dozen cupcakes for us to share. i have a feeling i'm gonna have a tummy ache in the AM.

my sister is going down to grant park to be part of the (hopefully anyway) celebration in chicago when the results come in tonight! eeeeeep!
Posted by becca jo at 6:49 PM No comments:

some underbite molar monkeys (thanks tim for the name and jyk for the awesome cutting job!) , check them out at clapperclaw next saturday! 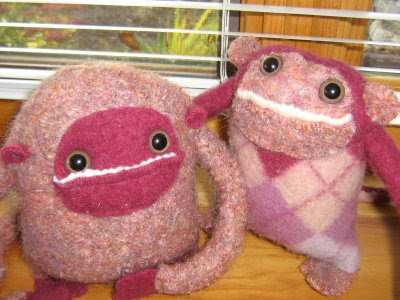 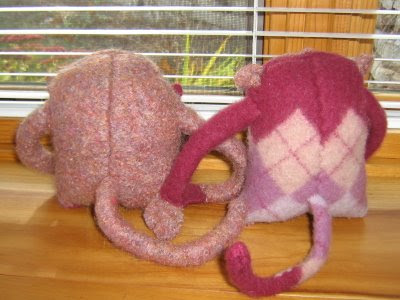 batman was too late to rescue quint from JAWS. 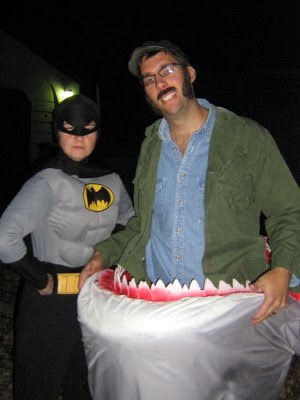 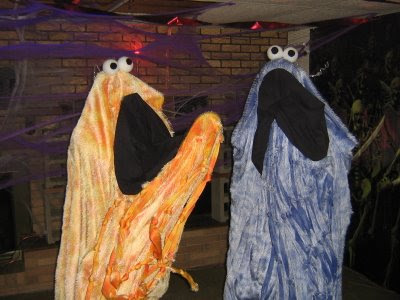 and the winners of the costume contest........made by yours truly and worn by jyk and witthaus. they rehearsed their shtick for HOURS. it was hilarious. 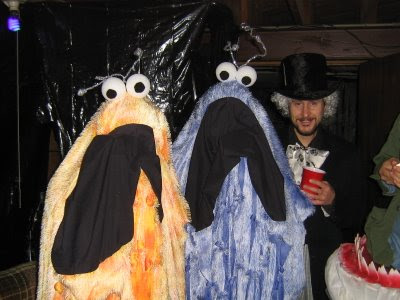 my costume was airship captain, which i made in about 3 hours. will take photos today. i wasn't 100% happy with it but it was fun to try. maybe next year it'll be better. anywhoo.

the drive home last night sucked. i hit a cat. there was a cop at the other part of the intersection who tried to put the poor guy out of his misery but he crawled away. i felt so awful. i still do. i can only hope he is at peace. ugh.
Posted by becca jo at 12:06 PM 4 comments: