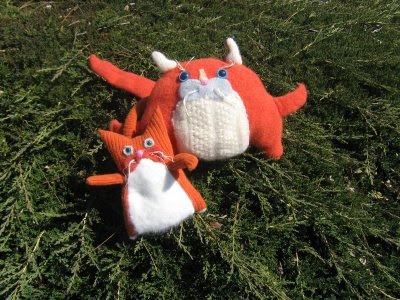 largish cats, the small one has a white angora belly and green eyes, the bigger guy is made from just about an entire sweater's body shrunk down. one of them might get to go live in bermuda! wish he could take me along.....
Posted by becca jo at 2:32 PM 1 comment: 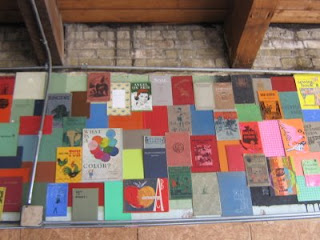 yay-the store is grandly opened!
what a fun nite, lots of supporters of local art stopped by. two of my parachuting mice had sold earlier in the day, i hope the folks who took them home give those little guys a good home ;)
here are links to a few photos of the store, snapped by some very talented ladies.
and here's one of my own snaps of the wall above the door. sarah put old book covers up and they look absolutely amazing. if you are ever in the NE minneapolis, you need to check it out. if you come on a saturday, chances are good i'll be working! it's just down the street from my first 'office' job, at magnetic poetry, and it's so weird to be back in that neighborhood after all of the change it's been through.

we visited my gram this AM, she was doing SO much better, then we went to her church, my parent's church, and then to red lobster. i think my favorite part was the family that came in just before us, the little 3 year old boy gawping at the tank full of live (but not for much longer) crustaceans and shouting 'wook at that wobster's cwaws! they're huge!!!' . runner up to that would be the women behind us, complaining to the manager that their meals were too salty...she tried to explain that they didn't season the seafood with salt because it was already salty, having come from the ocean and all, but that she would let the cooks know they got some extra salty crabs and they should let people know. even though they complained, they still both took home their leftovers.

collected the key from my next house sitting job in WBL, and came back here to read the internet, play some games, watch some videos (including dr. horrible, now i know what all the fuss was about), etc. nursed a window-struck bird back to health (in reality, just put it on a piece of newspaper so it wouldn't have to lay on the ground as it recovered), watched a mexican standoff between two blue herons, an egret, and a canada goose in the pond out back, and now, am contemplating going to bed with the sound of real rain instead of my noise machine's version of it.

will possibly be going back to work @ the G for a few days this week, but it could also work out that they don't need me. i've got some new projects and ideas brewing in the studio that i'm excited about, and there's the little matter of cleaning the highland park house before the house sitting folks return on tuesday. .....
Posted by becca jo at 8:21 PM 2 comments:

turns out my grandma was being over medicated by the nursing home staff. phew! she's going to be fine. i'm still spending tomorrow and sunday hanging out with her, but it's a relief to all of us to know it's as simple as that.
thanks to all for your support and good thoughts!
Posted by becca jo at 3:21 PM 1 comment:

my grandma is .......she's 90 years old, and things just don't work the way they're supposed to sometimes. i mean, it happens to all of us, this wearing out and breaking down.
i just don't want it to happen to her. anyone, really.

i'm stripping down my weekend plans to spend most of the weekend with her....i don't want to miss out on quality time with my gram....
Posted by becca jo at 10:22 PM 1 comment: 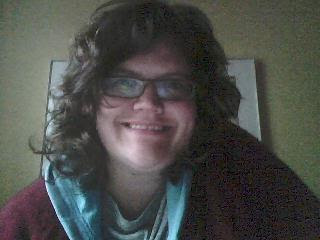 been overhired at the G again. love, love, love that job. one minute i'm arranging silk flowers, then i'm re-weaving a basket that has broken half its rim off, the next i'm digging out a mattress from the warehouse. it fits my crazy non-concentrational mind just perfectly!

i seem to start a lot of posts with 'been super busy lately...' so i'm not going to start this one with that. but it's still true. since getting back from my fantabulous visit to chicago, it's been nonstop ACTION!!! must be the new haircut.....

the new location for I Like You opened on Friday, i stopped in to help run the register a bit and finish up the last-minute bits and bobs of getting it open. saturday i did an earth-day deal at a park in NE minneapolis for artscraps, we made buttons with sticky-back vinyl and recycled grand old days buttons. there weren't a ton of folks but the people who did come made some AWESOME buttons. the folks from the MN raptor center came too and once those owls and hawks came out, the button making fell off the radar of the assembled earth-day-celebrators, how can you compete with raptor action?

so after i was out-awesomed by the flying birds of prey, i swung by the store again and had lunch/dessert/coffee with my friends janie and andrea. saturday nite i went back up to hugo, stayed over sunday and worked on the website for the store and really didn't do much workin' in the studio, as i had hoped to do. i'm trying to figure out a $10 price-range item that folks like and i can make in a short enough amount of time to make it worth my while! the finger puppets i made a while back were fun but i was spending almost an hour on each one there towards the end...stupid perfectionism!

i found out earlier in the day that i'm getting a FREE table at the st. paul art crawl this weekend, which is awesome, but it also means i've gotta get my rear in gear and crank out some ANIMALS.

OH and also awesome, my DALA HORSE pattern has been chosen to be in a book! same folks that are doing the one-yard wonders, Crafty Planet, are working on a "green" crafting book as well! how cool is that! so my instructions will be modified slightly to emphasize the recycling aspect of the project...stay tuned!
Posted by becca jo at 8:59 PM 2 comments: 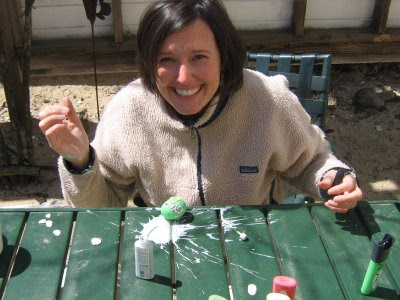 The Glitter Eggsplosion, Starring my sister Betsy.
Setting: The sandy yard outside my sister's husband's aunt and uncle's place (in the town where they met).
Activity: Puff painting pre-dyed Easter Eggs in the morning sunshine.

Exactly thirty seconds before this photo was taken, my sister exclaims, "These damn glitter ones never work right....." as she's squeezing the heck out of the glitter paint tube of Puffy Paint.
I hear a sound like a shotgun going off and look over to see this. The tube had gotten clogged and the nozzle just shot off the tube of paint, looking like a giant glitter crapping seagull had hit the table and the egg. Before I got paper towels to clean it up, I had to get a picture.....
Miraculously, she only got a smidgen of this stuff on her clothes. We got a lot of laughs out of it! 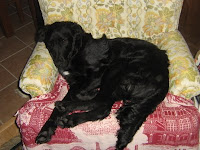 Betsy and David are off to Mexico with 12 of her students, to build houses in Mexico! That means Berkley, Raja, and I are chillaxing for a few days in Chicago. I can't believe how much this pooch has grown. He's such a cutie and a total cuddler.
Posted by becca jo at 4:41 PM No comments:

matthew turned 3 (!) so a party in missouri was in order.

my nose is dripping, i think it's just allergies, not the cold i usually get following a weekend with my lovely nephews.

the new i like you location is coming together, spent the day over there helping out where i could.

i've learned to crochet and i totally am hooked (sorry for the terrible pun, but it's true).

i went to the textile arts center after working at the store and was totally inspired by the show that's up right now.

check out this piece made from pheasant and peacock feathers!
Posted by becca jo at 6:04 PM 3 comments: