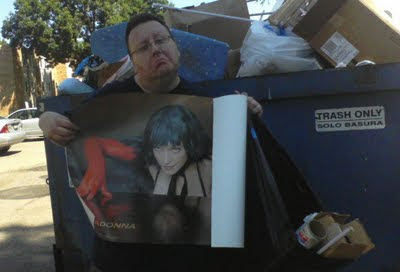 my very good friend jason recently moved to vegas. he is a 'collector' of cd's, movies, books, and other media. his favorite person on the planet is madonna. by the time we got into his 'save forever' closet, he was in such a purging mood that he threw away a collection of about 20 madonna posters and countless magazines featuring the material girl. helping him sort through his years of accumulated stuff lit a fire under my own bum to get moving and get on with my life. thank you jason for being an inspiration!

instead of viking funeral, we had a full dumpster. i still wonder if he went back and fished them out after i left. but i digress....

i am trying to decide, what things do i need to let go? not only physically but emotionally and spiritually......what has been holding me down and strangling me all these years?

i have gotten a new (old) job again. i am returning to work in theater full-time, as the shopper/buyer for the props department at the Guthrie theater. i couldn't be more excited. i won't post much about my job except to say that it's going to be awesome and it will allow me to do things i've not been able to in my current position, but i will miss my job at the church very much.

i am also hoping to buy a house soon. once again, i don't want to say much, except that if it does happen you can count on a LOT of house/DIY posts in the future.

the goal is to make sure i don't end up on TLC's hoarders, buried alive. i could probably actually film an episode from my car. but i need to develop a new attitude....let it go....and watch it drift away...